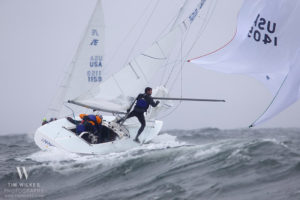 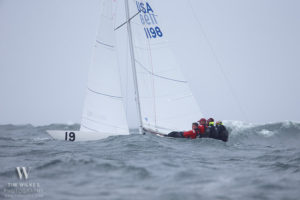 Rye, N.Y. (May 20, 2018) – What started out as a foggy, wet morning, turned into a glorious day on the Long Island Sound off the peninsula that American Yacht Club calls home. Peeks of sunshine and a light breeze that built throughout the day, gave the Etchells Atlantic Coast Championship competitors a wide range of conditions to test their skill.

The battle for the top slot was very close with lead changes after every race. In the end, Jose Fuentes of Annapolis Yacht Club and his crew, consisting of Luke Lawrence and Ian Coleman, proved their deft command of the fleet with a 2nd, 1st and 3rd to finish off the regatta and claim the Championship.

After the prize-giving, Jose reflected on the event, “The Etchells class is a phenomenal class. It’s a great group of guys and ladies. Some of the top sailors in the world sail in this class. So we are absolutely stoked that we were able to win this event. … It’s like going out to play golf with Tiger Woods. Right? You’re sailing against the best that there is in the world and that’s a great feeling.”

Finishing second was William Douglass on Goombay Smash who finished yesterday with a bullet and started today with another one. Despite a well sailed regatta, four points still separated him from the champion. Scott Kaufman, who sat in first place yesterday, slipped to third. Finishing first Corinthian and fifth overall was Senet Bischoff and the crew of KGB.

The weekend showed that the local Etchells class is ripe with top sailors, both amateurs and professionals. US Youth Team sailor, Orrin Starr said, “Yesterday we started a race between Benj [Steve Benjamin] to leeward and Goombay to weather, and it teaches you how to go fast quick when those guys are starting right next to you. So, I think it’s good to sail against the best sailors in the world. It’s part of the appeal of the Etchells class.”

The Atlantic Coast Championship marked the first in a series of five regattas that will be sailed throughout New England and the Long Island Sound. The next stop is the New England Championship hosted by Shelter Island Yacht Club and Etchells Fleet 15 on June 16th and 17th.

Rye, N.Y. (May 19, 2018) – The Etchells Atlantic Coast Championship hosted by American Yacht Club kicked off today on the Long Island Sound with breeze over 20 mph and waves over 6 feet. While not a day for the casual sailor, seasoned veterans embraced the conditions. Among them was current Etchells World Champion, Steve Benjamin who commented “We as sailors sometimes get nervous here in America that we don’t sail in heavy enough wind. And when we get great conditions like today, it’s great that we actually had a race committee that will hold the races. They started right on time. They decided to have two races, which was fine with us. I was pretty cold. But those were two superb races in very challenging conditions.”

The race committee’s efforts made this possible and two races seemed to be the best balance for keeping the sailors happy in the unseasonably chilly late May weather. Winning the first race and holding onto the top spot after day one, was the 2017 North American Champion, Scott Kaufman from the New York Yacht Club. Holding a close second and tied on points, was Jose Fuentes from Annapolis Yacht Club. William Douglass and his crew on Goombay Smash sit in third only two points behind the leaders.

To help shake off the cold and wet weather, sailors were greeted on the shore with belly warming chili and crisp beer provided by Carlsburg. For wine aficionados, fine Pinot Noir and Sauvignon Blanc
were provided by Landmark Vineyards and JUSTIN Winery.

Warmer temperatures will return for tomorrow and so may a few afternoon thunderstorms, followed by clearing skies. If all goes well, the fleet will enjoy a few more competitive races, then a prize-giving celebration on the American Yacht Club’s picturesque lawn at the tip of the Peningo Neck peninsula.

The International Etchells Class has a long history dating back to 1966 when E. W. “Skip” Etchells, a boat designer and sailor built the boat for trials for a new three man Olympic keelboat. Despite having the best performance of the contenders, the Etchells (known as the E22 at the time) was not chosen. However, the boat’s performance won over many sailors and the fleet flourished in the years to follow.