Welcome to Corpus Christi, have a nice day!! 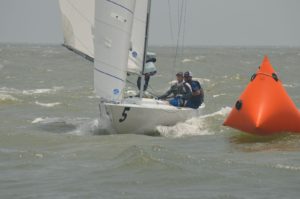 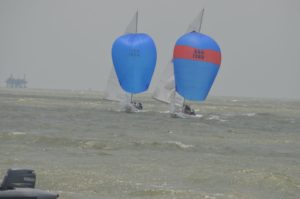 The morning brought sun and heat. At the 9am morning debrief, the breeze was already up higher than it was for the third race yesterday.  The fleet decided that we really didn’t need to sail a big race track, so the distance was set at 1.2NM. After a clean start, it was all about staying in phase and hiking hard. We saw 160-145 with pressure between 18-25 kts. Steve Benjamin nailed the start and was gone. Shannon Bush , Ken Womack rounded out the top‎ three.
The second race, the pin was slightly favored. Benji nailed the start again, and led wire to wire. However, the breeze was starting to lay down as it slowly marched to the left. Staying in phase and keeping clean lanes was key, as 2-6 were duking it out each leg‎. On the bottom of the last run, the breeze started to pick up again. Jay Cross and Shannon Bush finished right behind. 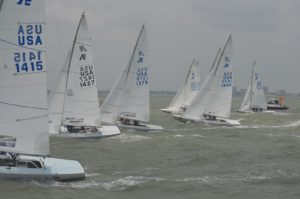 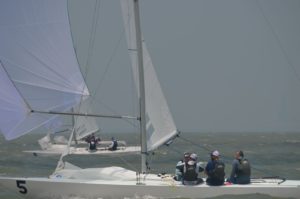 Third race. Arms are noodles. It’s hot and the breeze is starting to pick up again, with the sea breeze trying to kick in. The top 5 were constantly changing, all based on who got through the big waves with short steep chop the best AND stayed in phase. Downwind saw the fleet spread out in a line across the course. The teams that sailed their boats really hard and pumping were the ones to gain the advantage at the final gate. Jim Cunningham crossed a few boats and and was first around the left gate, and continued to the right. Shannon Bush and team chose the right gate and pushed hard to the left. Both teams came to the top. Bush ducked Cunningham and they went into the final mark a few boat lengths apart (the washing machine was ON at the top of the course!). Bush had a bad set and Benj snuck in on the run. Cunningham and Benj went to the left downwind. Bush stayed out to the right. All teams working VERY hard in the surf. Cunningham held on for the win, Bush managed to stay low and passed Benj, who held on for third from a hard charging, very fast Jose Fuentes, coming out of the right pocket.
Everyone got back to the dock around 2:30, tired! After some free beer and a cash bar, the daily firsts were handed out. Then the Dave Ullman-led debrief started, with each race winner’s driver explaining what worked for them. The afternoon wrapped up with plenty of great CCYC munchies.

There are two races tomorrow and the forecast is for slightly less breeze. 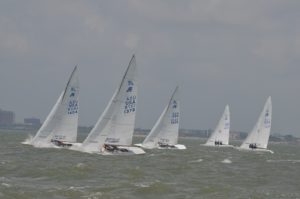 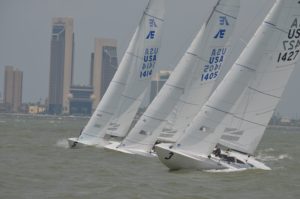