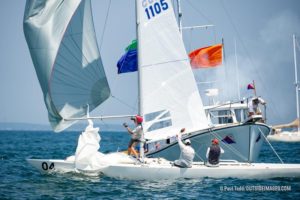 Robert Hitchcock and his crew on “Chemical Monkey” sails a brilliant last day on his way to winning the Etchells fleet. – photo © Paul Todd / Outside Images / NOOD.

In the Etchells fleet, a fantastic final day by Robert Hitchcock (Dorchester, MA) and his crew, Kent Paisley and Timo Platt, sailing aboard Chemical Monkey, saw them move from fourth to first after three races.

“We sailed really consistently,” says Paisley, the team’s tactician. “We did a great job of keeping our boat moving and working together as a team.” Hitchcock’s crew has been sailing together for more than 15 years, competing in the Etchells at the national and international level.

“We didn’t know we had won when we crossed the finish line,” says Paisley. “We had a good day, but we didn’t know it was that good. This is such a competitive fleet, so we just kept our head in the game and things went our way.”

At the awards ceremony at host Boston Yacht Club, Hitchcock and team were presented the new Dave Curtis Marblehead Race Week Trophy, handed out by National Sailing Hall of Fame inductee Dave Curtis. “We’ve seen Dave’s transom plenty of times on the racecourse before,” says Paisley. “He’s a legend of the class and it’s an honor to accept this award in his name.