Two boats from the US Etchells Youth Team competed in the 2018 Gertrude Cup in Cowes, United Kingdom on July 14th-17th. The annual regatta, hosted by the Royal Thames Yacht Club, showcased an international fleet consisting of ten boats. Five of these teams were classified in the Youth Division.
The English sea-breeze built into the mid-teens across all four days of racing in the Solent. “The racing was extremely tight throughout the event, and it meant that our starts and first beats were critical,” says team member and skipper Sean Cornell. Close fleet scores resulted in an exciting fourth and final day of racing, as five teams has a realistic shot at 2nd place.
US Youth Team “Blue” secured 2nd place after winning the final race, which recorded sustained winds around 24 knots. The boat, skippered by Cornell and crewed by Chris Manson, Scott Ewing and Rachel Daye, also secured the perpetual trophy for winning the Youth Division. US Youth Team “Red,” skippered by team captain Connor Needham and crewed by Jimmy Kennedy, Brooks Daley and Franny Schulte, finished 7th.
Founded in 2017, the US Etchells Youth Team aims at expanding the North American Etchells fleet and introducing young talent to the class. The selection committee consisting of Michael Gavin, Senet Bischoff and Steve Benjamin brought the total number of team members to thirteen with the most recent round of applications. Team funding relies solely upon gracious private donations and sponsorships, including companies such as Newport Shipyard and Regatta Ginger Beer. Recent donations of two additional boats have allowed the team to train together and compete at various regattas in the Northeast this summer. Please consider making a tax-deductible donation to ensure the continued success of the team. 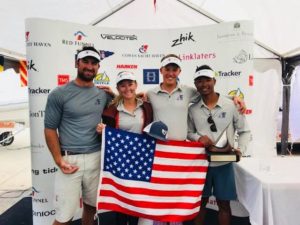 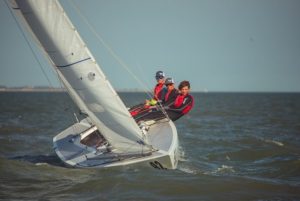